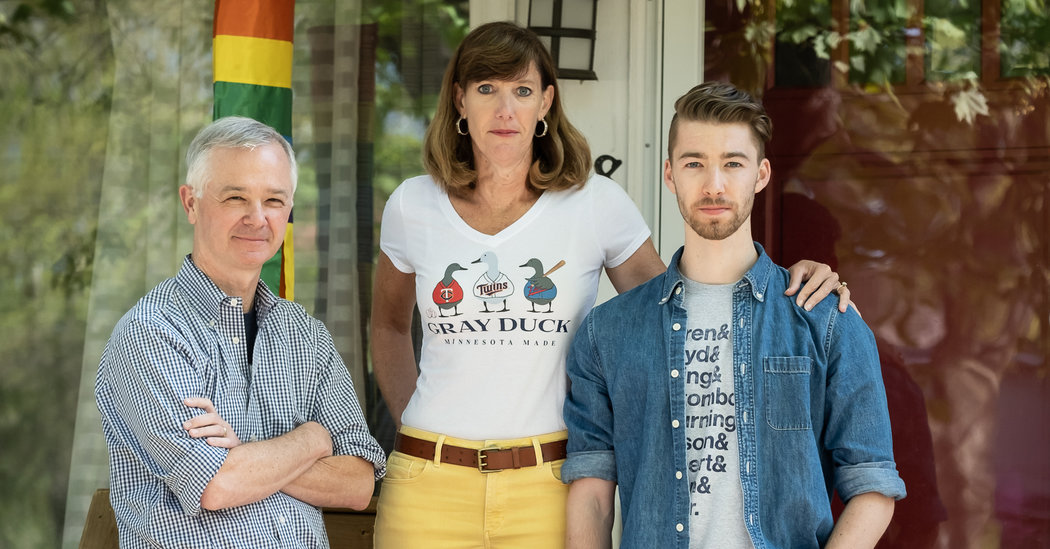 Andrea Yoch loves her adult sons, but would also love to not live with them.

This is especially true in the 2,200-square-foot rental in St. Paul, Minn., where she and her husband moved after the boys left their childhood home (a 5,000-square-foot property with a pool). But now Ben, 20, and Ryan, 23, are crammed with their parents in a house where a movie playing in one room can be heard in almost any other.

After her sons showed up early in the pandemic — Ben from Boston, where he is a college student, and Ryan from New York, where he was starting out as an assistant advertising account executive — Ms. Yoch hustled to set up makeshift offices in a bedroom and a basement that now also functions as a heavily trafficked gym. On Ryan’s first day of telecommuting, Ms. Yoch walked in while he was on a video call and, without thinking, kissed him atop his head.

“I would give anything for them to resume their lives,” she said.

As the pandemic persists, Wall Street bankers, Uber drivers, academics, artists and many other adults have turned reluctantly into boomerang children, uprooting their independent lives and migrating home. Some had partners, children and pets in tow. More than a few wondered if they carried the virus, but risked moving in anyway.

There were people who fled dense cities for the bucolic suburban houses where they grew up and the promise of home-cooked meals and free laundry. Others ended up in downsized spaces designed for empty nesters or in apartments already shared with other family members, such as grandparents or school-age siblings.

Parents caught by the swell of layoffs, furloughs and canceled contracts found themselves feeding grown children who were in the same position. Mothers who had grown accustomed to freedom were suddenly expected to return to cooking and cleaning. Shorts, cat food, headphones and other items had to be purchased because the new residents had not packed enough to last through the extended lockdown; their abandoned apartments had to be cleared out when the leases began to expire.

“Some parents see this as a welcome surprise, but it can also add a lot of fiscal strain,” said Lindsey Piegza, chief economist at the investment bank Stifel. “You can’t assume that parents are necessarily in a better-off position than their adult children; a lot of Americans live paycheck to paycheck and don’t have the discretionary savings to accommodate extra people living in their households.”

In a normal spring, Ms. Yoch, a freelance marketing specialist, would be working on a local music festival and a soccer tournament. Instead, 60 percent of her income is gone.

Her grocery costs have soared, and she has had to stock up on laundry and dish detergent. Her younger son had planned to work during the summer to support himself, but his job may fall through. Her older son had to be added back to the auto insurance plan, and the family decided to buy another car because “everyone’s going to be here for a long time,” she said.

“We have to rethink everything,” Ms. Yoch said. “What we’ve worked really hard to get to — our independence, their independence — is just gone.”

For many people who have returned home, career momentum is also at risk, especially for those who were just starting out in industries that have been pummeled by the pandemic.

“There are lasting consequences, a qualitative impact on workers who are forced to take a step backward, and that can really perpetuate a downward career spiral,” Ms. Piegza said.

But younger workers are “notoriously poor savers,” she said, and many were caught without rainy-day funds during a devastating economic storm. A multigenerational quarantine was often the only viable option, albeit a potentially dangerous one given the risk of the virus spreading in close quarters.

For years, Justin Premo spent nearly everything he earned on groceries, credit card bills and rent, most recently for a $4,000-a-month Brooklyn apartment that he shared with two Irish nationals and an Australian. Only in the past year had the 31-year-old, a gear specialist at a camera rental company, managed to start saving money.

Then Mr. Premo was laid off. His roommates quickly returned to their countries. In mid-March, with barely more than a month’s worth of savings, he broke the lease and his father arrived with a pickup truck to move him out, after weighing Mr. Premo’s concerns that all his roommates had experienced Covid-like symptoms.

Now he lives in Troy, N.Y., near Albany, with his parents and two of his three brothers, having temporarily isolated himself in his bedroom after he arrived. Once the pandemic ends, Mr. Premo hopes to move back to New York City, but has also mulled whether to remain near home, where costs are lower.

“It feels like I’m in stasis; just directionless, completely arrested development,” he said. “Considering that the economy we’re heading into is so uncertain, it may make sense to stay up here.”

After being furloughed from her bartending and digital marketing job in Chicago, Cara Fattori, 24, moved home to the suburb of Crystal Lake. Her room there had been repurposed three years ago into a space that serves as a yoga studio, craft room and storage for her 17-year-old brother’s hockey gear.

Also sharing the 1,950-square-foot home are her mother, a flight attendant who has been on paid leave since February; her stepfather, a retired Navy veteran with a pension; and her brother. Ms. Fattori has offered to pay for groceries, but said her mother would only allow her to help with household chores. She continues to split rent with her roommates in Chicago, but no longer has to pay for utilities, groceries or $1.25-per-load laundry.

Ms. Fattori said that going home, accompanied by her cat, had been “a weird adjustment.” Her mother and stepfather’s cat has a tendency to play in the toilets, so bathroom doors in the house are supposed to remain closed — a rule that Ms. Fattori occasionally forgets because her own cat does not have a lavatory fixation.

She does not expect to return to Chicago, where the population per square mile is roughly six times that of Crystal Lake, until possibly July. Nearly half of her high school friends have also returned home, she said.

“It’s a lot safer in the suburbs; I can ride my bike through the neighborhood and not worry about getting infected,” she said. “But it was an economic decision.”

Multigenerational households have been on the rise since 1980, according to a 2018 Pew Research Center report. In 2016, a record 64 million people, or 20 percent of the U.S. population, lived with two or more adult generations.

In the chaos of the pandemic, some of those included parents like Julie Kogen, who sought out their adult children.

Ms. Kogen moved in March from Boca Raton, Fla., to Chillicothe, Ohio, where her 26-year-old daughter had a spare room.

Ms. Kogen knew she could run her home-design business remotely. Her mortgage was paid off. She wanted her daughter, an emergency-room doctor who Ms. Kogen feared was subsisting on fistfuls of cereal, to have home-cooked food. Besides, it felt safer to hunker down in the rural Appalachian foothills, where her daughter’s two roommates are also hospital workers.

“It’s a Catch-22: I can’t go near any of them, but if I got the virus, God forbid, I would’ve gotten excellent care,” she said.

Back in Florida, Ms. Kogen’s electric bill has fallen $100. She has frozen her car insurance payment and is “saving a fortune” on fuel. She is not contributing to her daughter’s mortgage payment, but is paying for all the groceries.