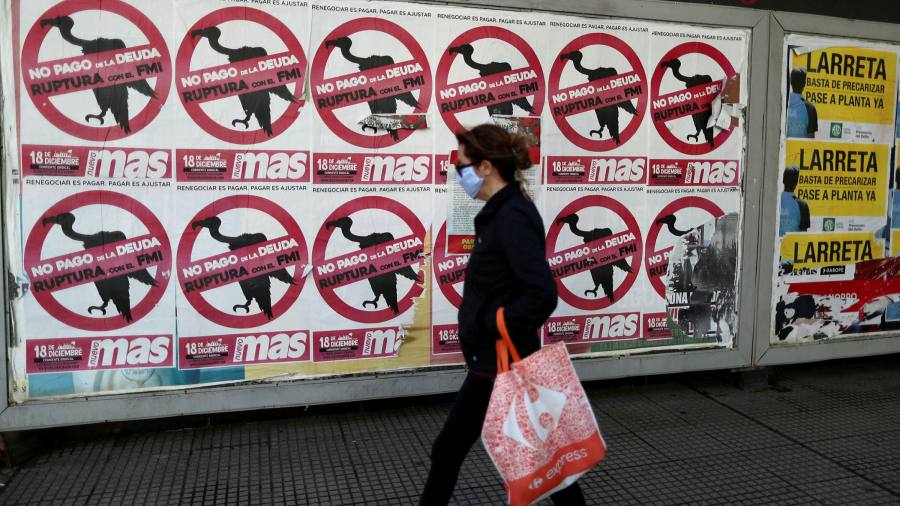 Argentina’s negotiations with foreign creditors over the restructuring of $65bn of debt are on the edge of collapse, threatening to plunge the economy even deeper into crisis.

With talks reaching an impasse as both sides appeared to refuse to budge, the government said on Thursday that Argentina “cannot responsibly commit” to creditors’ demands that would prevent it from achieving a sustainable debt burden and allow it to restore economic stability.

Argentina’s largest group of creditors — including BlackRock, Ashmore and Fidelity — insisted in a separate statement that the government had “walked away” from the “sustainable and sensible solution” they had offered, which reduced the average coupon rate to 3.6 per cent from 4.25 per cent, among other adjustments.

The group added that they were “now considering all available rights and remedies”, including taking the country to court as happened after Argentina’s last big default in 2001. The ensuing legal battle locked the country out of international capital markets for more than a decade.

Although Argentina formally defaulted on its sovereign debt payments last month, negotiations have continued. If they collapse, it could trigger a messier “hard” default that could worsen an economic crisis that has deepened since the coronavirus outbreak, fuelling one of the highest inflation rates in the world.

That has exacerbated fears that President Alberto Fernández — considered by many to be a pragmatist — has yielded to his influential and more radical deputy, former president Cristina Fernández de Kirchner. In a further blow to business confidence, Latam, the region’s largest airline, decided to pull out of Argentina on Thursday.

“The government is considering its options” said a source close to the negotiations on the Argentine side, adding that a collapse in negotiations in the coming days was “certainly a possibility . . . It’s troubling.”

Claiming that the government had made its “final offer”, the person argued that Argentina had already improved its terms “dramatically”. A new proposal called for coupon payments to begin as early as 2021, roughly two years earlier than what was initially put forward.

“We went an extra inch out from the extra mile to meet them and they don’t recognise that,” the person said.

Meanwhile the bondholders — who the government described in its statement as having demands that “frequently diverge, and cannot be readily reconciled” — are also evaluating their next move.

A bondholder in the largest group — which is co-ordinating its efforts with the second-largest group of creditors, who hold previously restructured bonds issued in 2005 and 2010 — said that its members were discussing whether to “accelerate” their bonds and demand immediate repayment.

“We are getting close to legal action, which will bring a lot more intensity on the government,” said the person, noting that both sides were not too far off from a deal.

Another person familiar with the matter on the bondholder side said: “We are looking at remedies in the documents, because from the point of view of creditors, if the counterparty is not prepared to negotiate in good faith, which is the perception at the moment, we have to examine ways to recover value differently . . . Much is going to depend on if the government reconsiders the rigidity of its current approach and seeks out a consensus deal with creditors.”

The person also added that the group was advocating for stronger legal protections on the new bonds so there were no “loopholes”.

“The current [legal] documentation provides too much latitude for behaviour by Argentina that is inconsistent with good practices in sovereign debt restructurings and will undermine creditor rights in the future,” the person said.

Members of that group are not the only ones harbouring frustrations with the government. Another creditor from a separate committee said the difference between what is on offer from both sides is “a rounding error”.

“It’s as if Argentina has snatched defeat from the jaws of victory,” the person said.